Pulled pork has got to be the cheapest and easiest bbq there is to make. If you can keep it roughly between 225-250 it takes care of itself. Plan to start the day early though, it can take up to 2 hours per pound. You can watch the temperature rise quickly and you'll think you'll be about done but it will sit at 160-170 for hours and hours while the fat renders out. If you want it for dinner that day, start early and put it in a cooler wrapped in towels when you're done.

I'm making meat for the freezer and friends so I got this pack that has two pork butts (upper part of the delicious piggie's shoulder, aka boston butt). You should be able to find it on sale for $1 a pound. Out of this $18 of meat I'll probably get 8-9 pounds of pulled pork. I also had a mushy pork roast thing and an old sausage chub in the freezer that I want to get rid of so they're going along for the ride. Oh and of course breakfast for me. 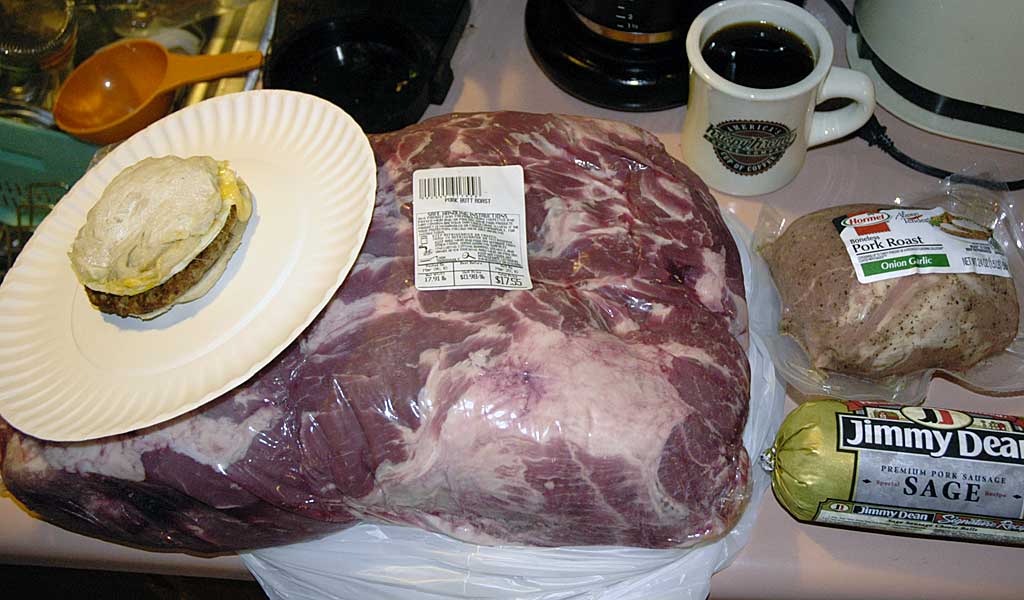 I'm using the minion method again so I load up my cooker with unlit charcoal and some wood chips/chunks. I like apple for pork but threw in a piece of hickory too. 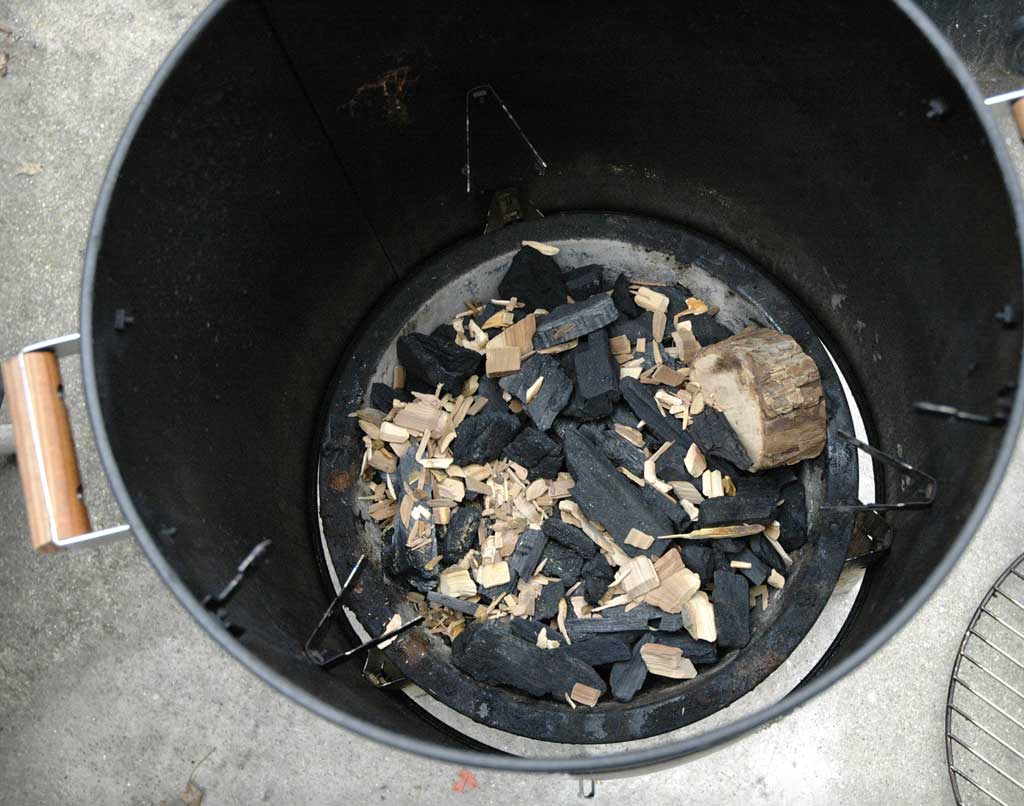 Get some coals started in the chimney to set things off. 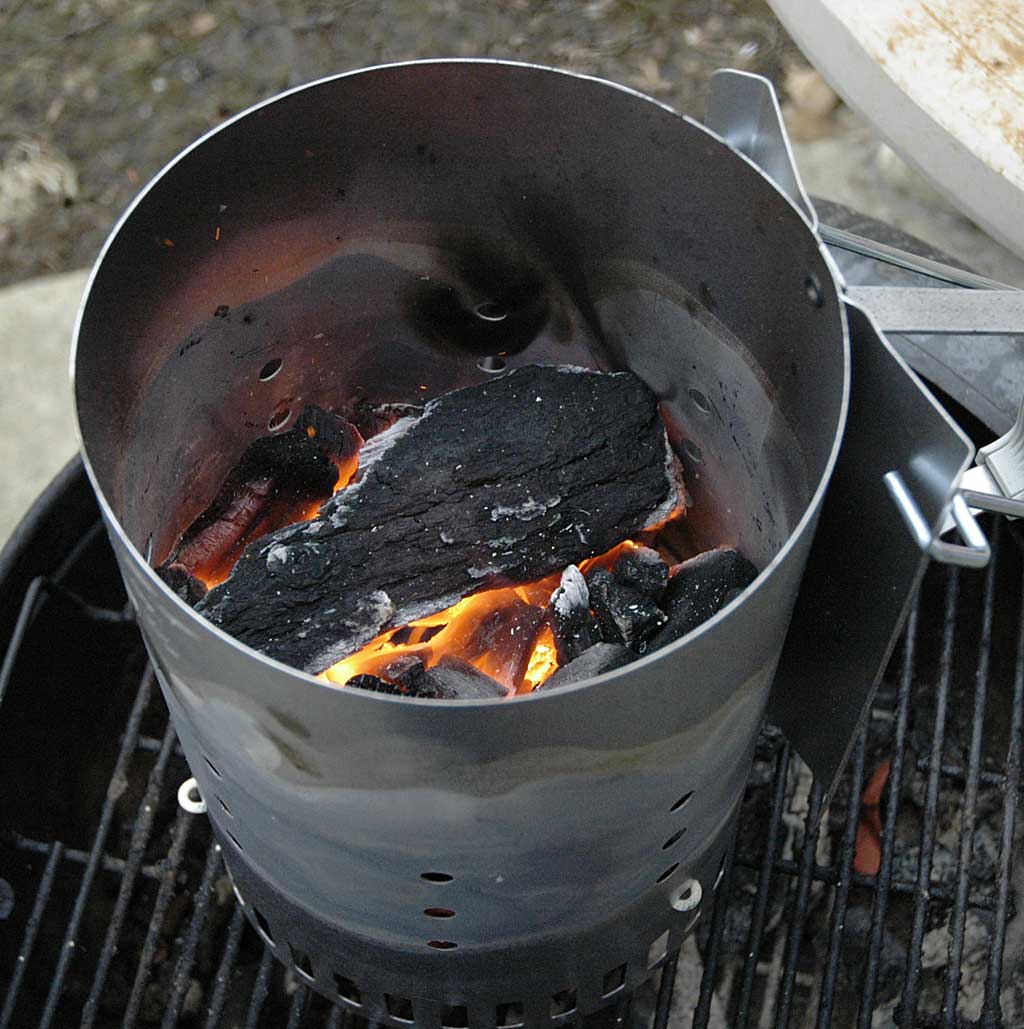 Here are my butts all trimmed up. Some people like to leave the fat caps on. I don't find they do anything to help my meat and they keep me from getting as good a bark (the delicious brown outer part of bbq) as I could with it removed. Some people also brush the meat with yellow mustard before they put rub on it so they can use more rub. I'd rather mix extra rub in the pulled meat at the end. I also like to "crown" my meat with some diagonal cuts. It gives some extra places for the rub to hide and I get more delicious bark. A healthy dash of rub everywhere and its ready for the fire. 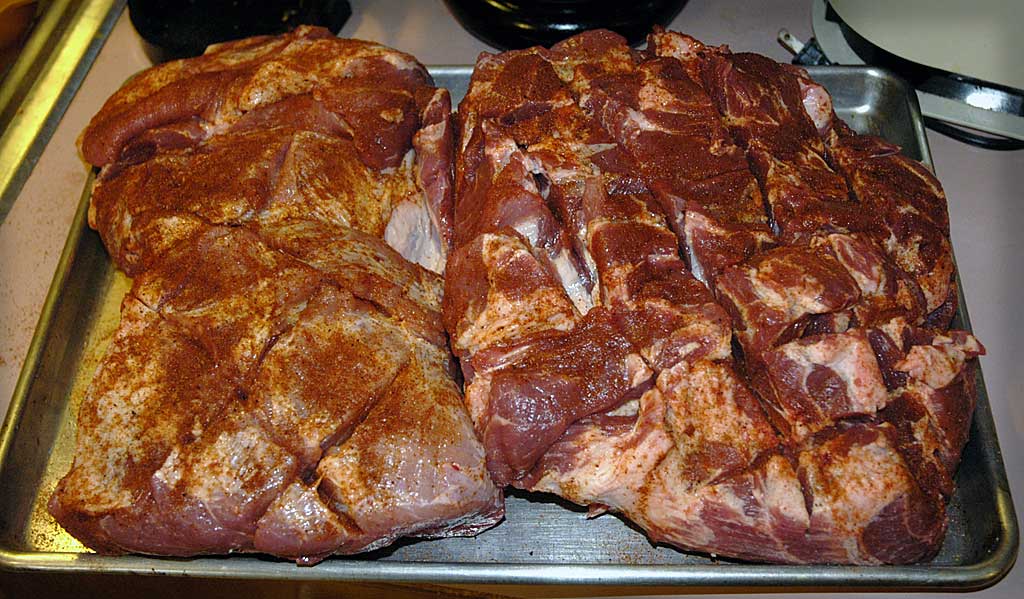 Nothing left to do now but sit and wait. This is the smoker I'm using today. Its available everywhere cheap. I don't recommend it, it is difficult to control temperatures in. 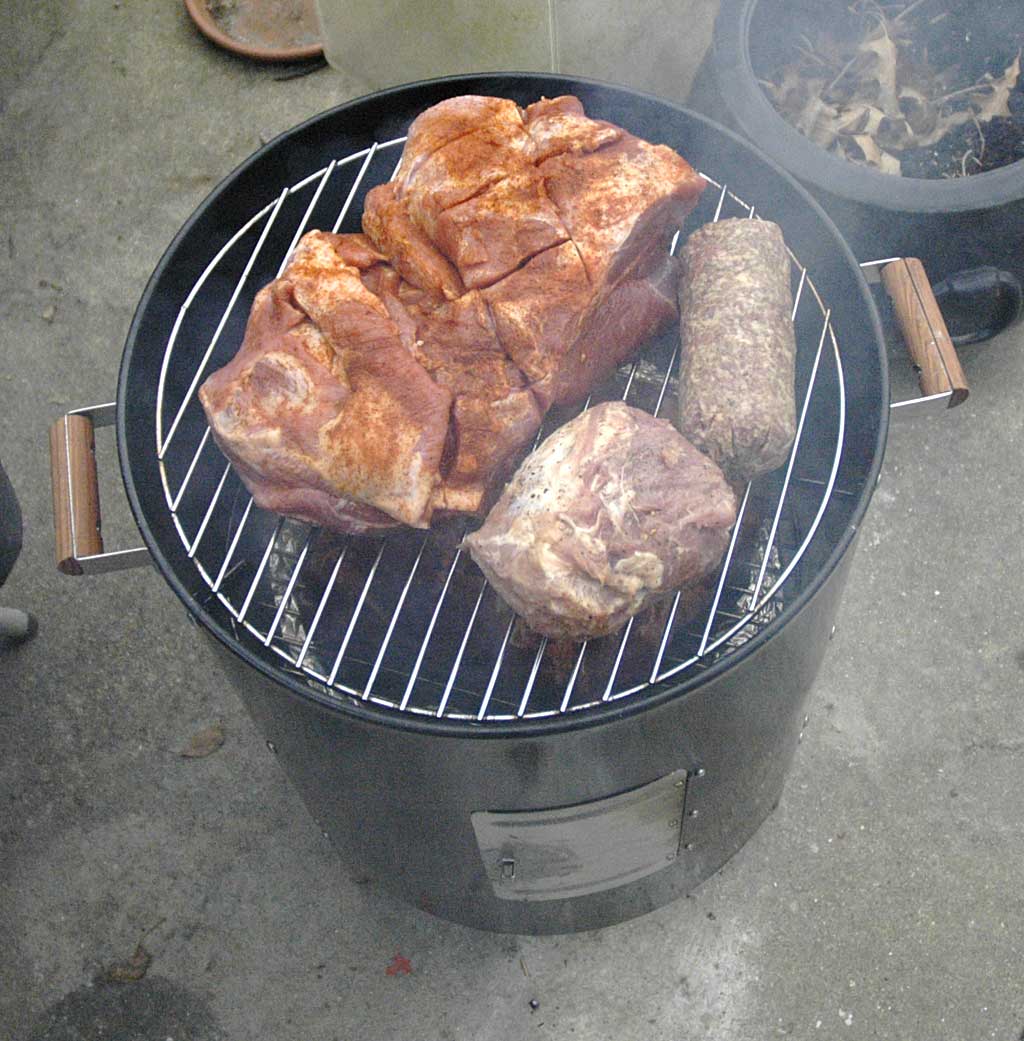 Lets look in on the party a few hours in. 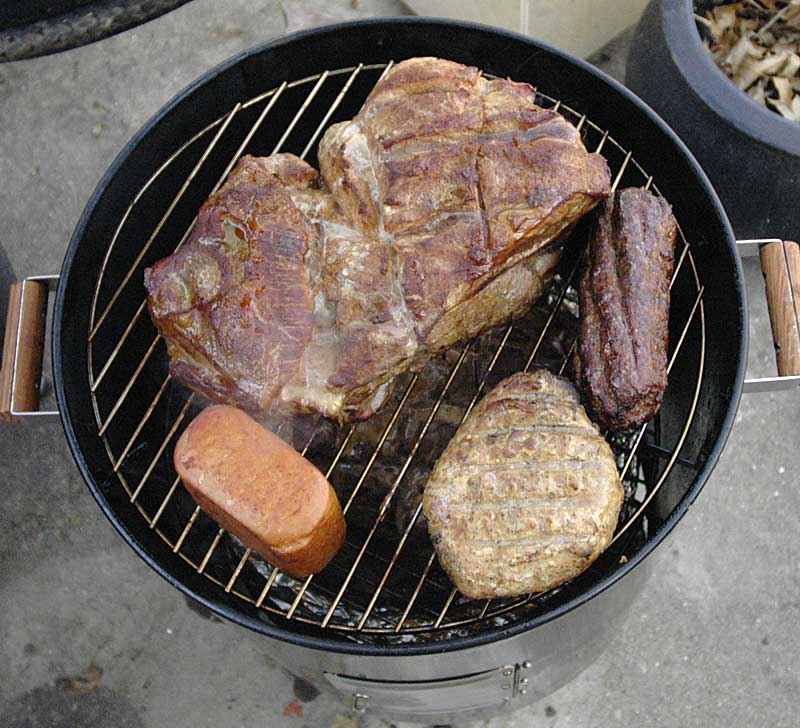 My roast and fattie are done. 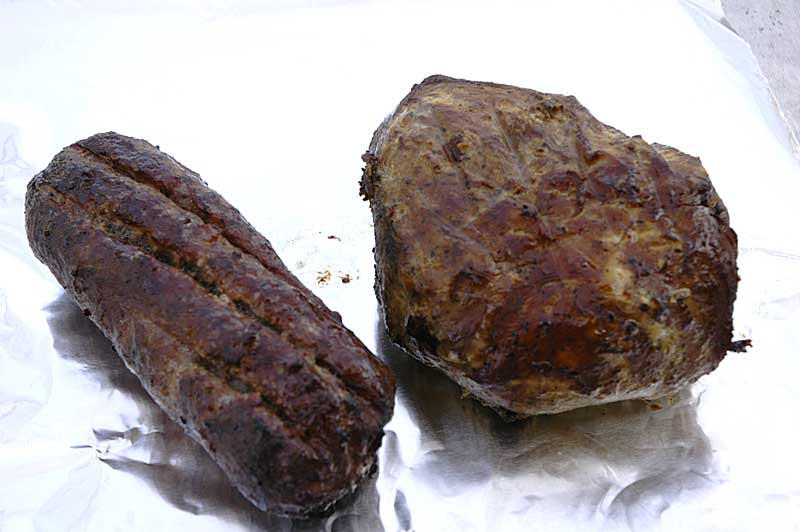 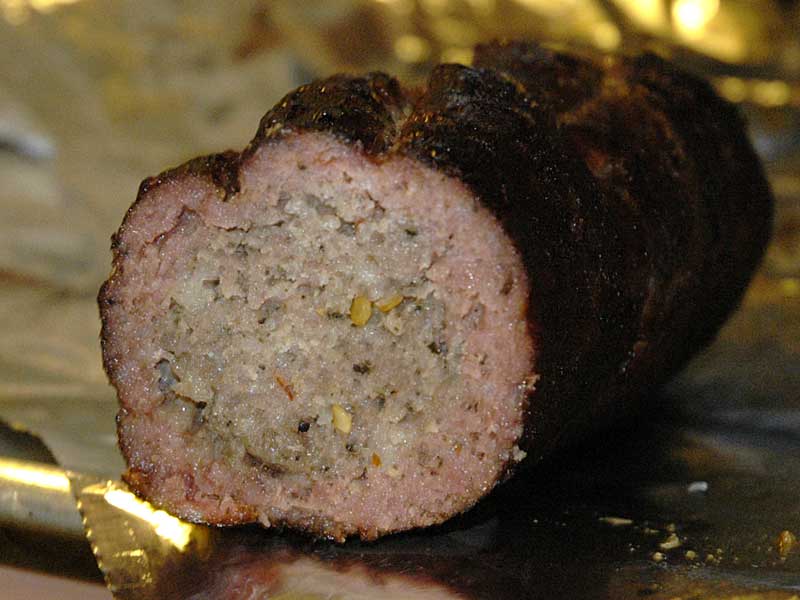 Almost done! If we cook to 200 degrees we'll have pulled pork, 180-185 would be an ideal temperature for sliced pork. You'll know when its done, it'll feel like you're sliding your thermometer into warm butter. You should also be able to easily wiggle the bone free from the meat. 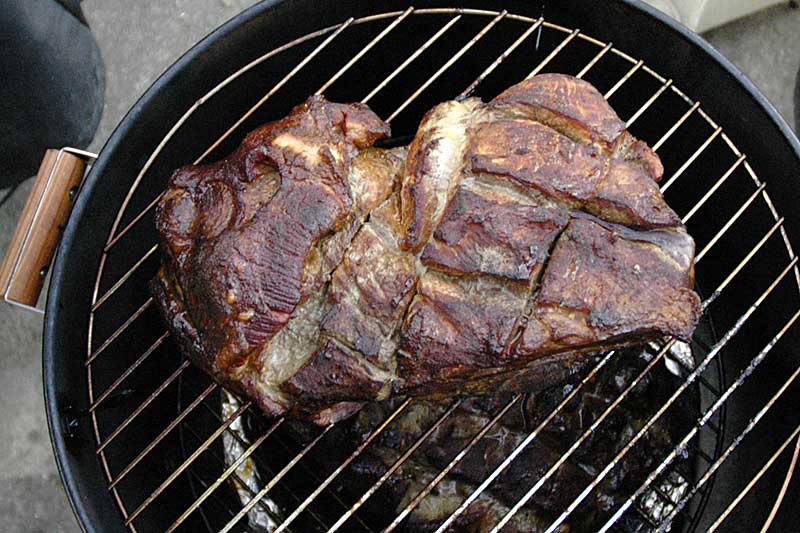 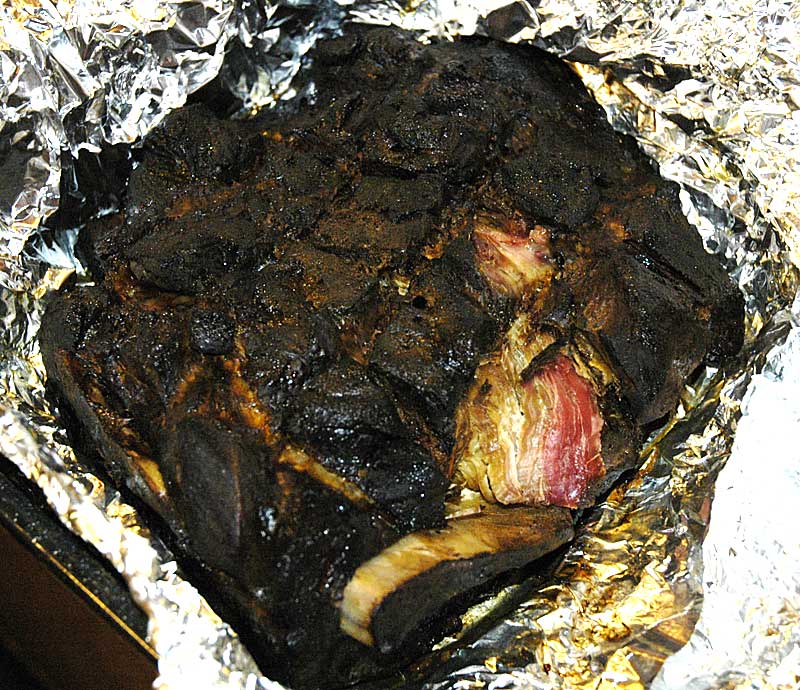 Some people just like to just two big forks for shredding but I have a pair of pvc coated gloves from the hardware store I like. They'll protect me from the heat and I can easily pick out the bits of fat, gristle and other mystery items. I got 8 pounds of meat today which gets vac bagged in 1 pound portions.

I put a bit on a plate, gave it another dash of rub, and added some incredible mustard sauce for a quick lunch. Gin and tonic washes it down well. 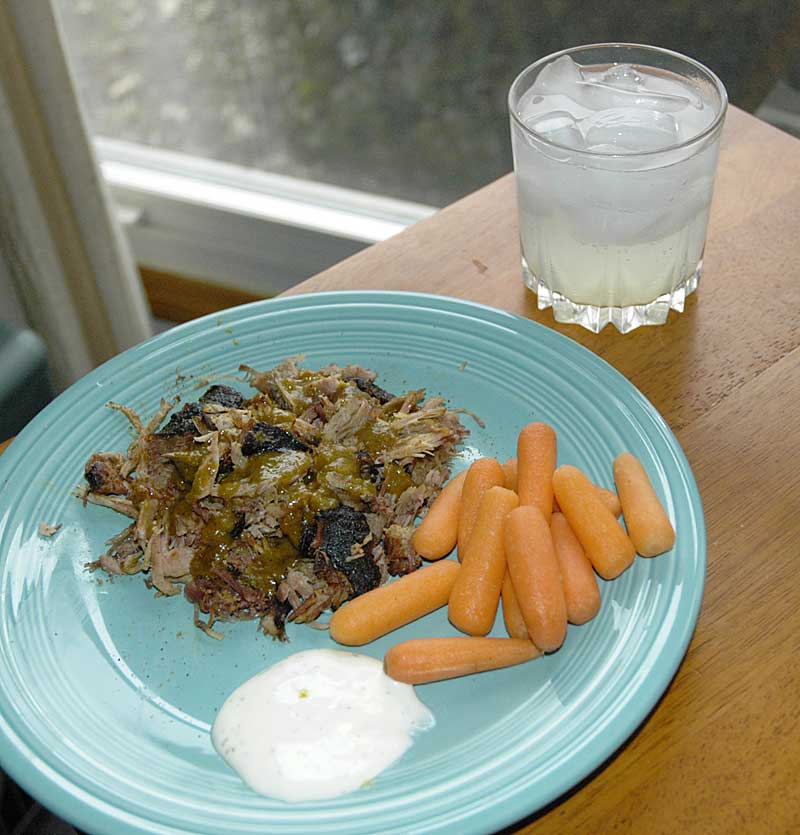 Contents are copyright NeverStopSmoking.com, all rights reserved. Be nice, don't steal my site.
Page was generated in 0.000085 seconds